A few miles down Ross Maxwell Scenic Drive in Big Bend National Park are the remains of the Sam Nail Ranch. There is a parking area along the road, and a short walk takes you to the old ranch site. The remains are clearly visible from the road as several old pecan trees and a windmill jut out above the surrounding brush of the desert landscape.

Sings indicate that the inhabitants of the ranch also planted fig trees that still remain, but I did not see any of these.

Mr. Nail homesteaded the ranch in the early 1900s, probably between 1909 and 1916, and continued operating the ranch for almost 40 years. Some accounts indicate that he may have owned up to 15,000 acres. There were many isolated ranchers in the years prior to the area being made into a national park. These rugged individualists were impressive as they lived in this difficult environment with its suppressive summer heat and limited water resources. The isolation was particularly difficult on women, who were few and far between.


The area around the house today has very thick brush. Over the years, much of it has regrown to overtake what once was an adobe-style house. A windmill stands near the house remains, still pumping water today. This water supply attracts wildlife and makes this a good area for bird watchers to view some birds that make their home here. 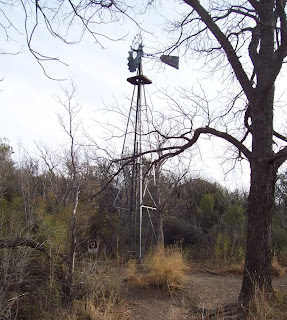 Mr. Nail ran cattle, goats, and sheep on his ranch near Burro Mesa. When he arrived, the grass was tall. I remember reading similar statements about the grass in J. O. Langford's account of his arrival in Big Bend about the same time (see "Big Bend Country"). However, ranchers new to the area did not understand how long it took for the grass to grow that tall, as the region goes through long drought cycles. As a result, the area was overgrazed and the grass could never recover. Brush then encroached, and the landscaped changed as a result.

So today, the remains of the ranch squat amid this brush with Burro Mesa in the background. It's a quiet place, and an easy stop for seeing what life was like in Big Bend in years past.

Posted by Keith Cameron at 3:47 AM